In our first episode of “How to Sell Insurance to Seniors,” we are fortunate to be speaking to an agent who is a military veteran with real affection for seniors. She’s also an absolute Medicare selling beast: Joanna Wyckoff.

Joanna works with Nationcare Services, where she has built quite a reputation for going the extra mile for her customers. Her Facebook group, which is extremely active and one you should definitely check out, is called Medicare Mentors.

SET UP AND SUCCESSFUL IN WAL-MART BEFORE COVID-19

Prior to the pandemic, Joanna set up a table in Wal-Mart and was doing very well. She was doing so well, in fact, with APP (Annual Open Enrollment Period) that others began to copy her success right away. Then, the pandemic came along, and she had to temporarily end her Wal-Mart presence, which forced her, in her words, to pivot in her selling plans. Joanna is going to share with us some insights into what agents must do today to serve seniors. She’s going to share some thoughts about the future of selling Medicare. Thanks to her grandmother, she’s also going to explode a myth about seniors and technology. Interviewer: There is a conversation that comes up over and over among agents. People are talking about carriers going direct. Even if that does happen, I don’t think that’s something that would eliminate brokers- especially with Medicare. People are seeing how lucrative it is. They’re seeing how big this market space is as more and more seniors are entering that Medicare space. It’s going to be interesting to see what happens.

Joanna: Right now, the game plan is that I am over at Wal-Mart’s one in my county that I’ve been in for three years and then one of the new ones that has a health clinic in it. We’re waiting to go back there any day. We’re just waiting for the world to go back. I had to pivot.

Interviewer: Obviously, I can’t predict the future. Everyone’s trying to guess what’s going to happen this fall. It’s going to be wild. What does your alternative plan look like telephonically?

Joanna: Can I show you? I’ve got all these direct mail leads. I would just enroll them over the phone.

Interviewer: Literally, what Joanna has just said, whatever you have, you can just pick up the phone and dial.

Joanna: This one here: they have their phone number, their email, their full name, and I have their address. The fact that they have emails tells me they can enroll by email. The carriers all came out with COVID telephonic procedures. What more could I ask for?

Interviewer: Is that a three-way phone call, or they just call back after you talk to them and say, “Hey, here’s my agent number. Just let them know you talked to me.” And they take care of it?

Joanna: Yes. That’s for Aetna. Every carrier came out with their own procedures. They all vary greatly. I put together an entire manual on how to do it for each carrier for our agents, and I distributed it to anybody who’s a member of any social media group that has invited me: Medicare Mentors, Medicare Gurus.

Interviewer: This is why I love Joanna. She doesn’t care who you’re affiliated with if you have a question. She will help you like you’re an agent in her downline.

Joanna: Thank you. When I started, we used to have to call the carrier to verify. Now carriers put it right there in their portal. I’m like, “How easy is that?” I used to have to wait on hold for 20 minutes.

Interviewer: I was talking to one of our clients exactly about that this week. He’s like, “We can verify all their Medicare information from a portal.” It’s really crazy because it was such a guessing game before. That’s just a fantastic thing to see a positive momentum on that end.

Joanna: I think the pandemic, awful as it is, really forced the industry to come into the new century. It’s exciting for the new brokers coming on. It’s exciting for the old brokers trying to learn new tricks. I have my job cut out for me. I have a couple of brokers who have done everything on paper for the last 20 years.

Interviewer: One thing I’m curious about your thoughts on. Before the pandemic, Medicare Advantage was definitely more regulated than it is right now. Like, if you were going to sell it over the phone, it had to be in a call center environment. And now it’s free flow in a sense. You can sell it over the phone at home. Do you think this is going to be the new normal?

Joanna: I think telephonic sales are here to stay. Have you ever had a dental agent come to sell you dental at your kitchen table? No. Why can’t we sell Medicare over the phone as long as someone understands what they are buying? A lot of people think that seniors don’t use technology. That’s a myth. Social Security proved it. So many people would apply for their Social Security benefits online because they didn’t want to take the two-hour drive to sit in a waiting room for their turn to be called. My 85-year-old grandmother has access to Facebook and everything. Some people are a little slower. My mom is a little slower than my grandmother, actually. You shouldn’t assume that, just because someone has a couple of years on us, they’re technologically deficient. 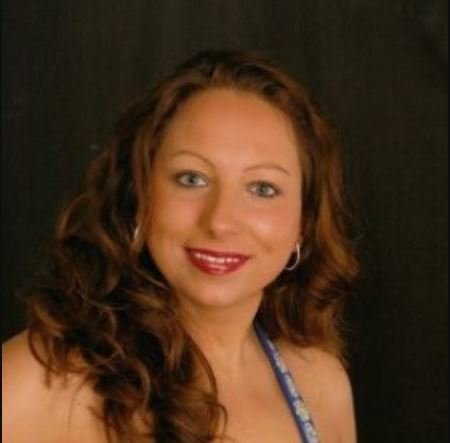 GET PODCAST UPDATES IN YOUR INBOX
Did you enjoy the show? Please consider subscribing to our podcast and get notified when new episodes come out. 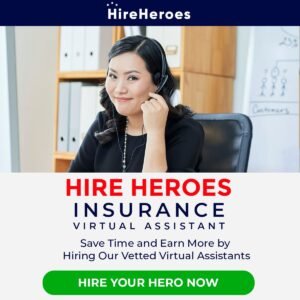 Subscribe for Discounts, Tips & Scripts to Simplify Your Marketing! In this second episode of “How to Sell Insurance to Seniors,” Lead Heroes’ Founder and President, Glen Shelton, speaks with Mike Gattorna. Mike, who likes to go by the name “Wizard of Light Bulb Moments,” is better known as the host of the weekly webinar Medicare Café. It’s held each Tuesday at 10 am Central Time and is open to any agent. 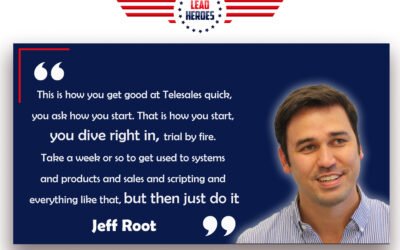 In this third episode of “How to Sell Insurance to Seniors,” Lead Heroes’ Founder and President, Glen Shelton, speaks with Jeff Root. Jeff founded DigitalBGA.com, a company that has always sold insurance strictly over the phone. This has qualified him to be the author of the highly regarded book Digital Life Insurance Agent in 2016. He has also hosted more than 50 episodes of the podcast Modern Life Insurance Selling, primarily as a way to demonstrate that life insurance can be sold over the telephone. 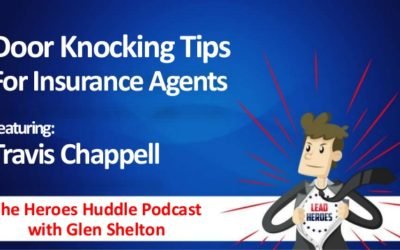 Welcome to the seventh episode of the Heroes Huddle Podcast, where we feature Travis Chappell, a sales expert who built his career through door knocking.

Travis got his start selling solar installations and security systems door-to-door. Working in these top competitive door knocking niches showed him the tricks and skills he needed to cross the threshold into people’s houses when he door-knocked – effectively transforming from a stranger on the porch to a trusted advisor on the couch. Many agents wait all year to ramp up their sales activity, when the Annual Enrollment Period (AEP) happens, which begins October 15th and goes to December 7th. Unfortunately, many agents are confused on what they should be doing come the new year that will launch them into even greater profits.

You have Successfully Subscribed!

Your information will never be shared